Today is the day. Today is the night when the sun won’t set, girls will jump stone fences and lots of herring with chives will be consumed in Swedish garages and tents. It’s Midsummer.

But let’s take it from the beginning. As with all Swedish traditions, there are a couple of given props and rituals, but it also varies from town to town, family to family and from generation to generation. The Midsummer I am about to describe here is the one celebrated by my family, our friends and neighbors for many years, when I used to live in Starrarp, a small village in the Scanian countryside (south Sweden.)

Everything starts quite early with getting dressed. It is always a dilemma as you want to look as pretty and “summery” as possible, but the weather usually let’s you down and when it is raining and 12 degrees warm a white, strapless dress and sandals is not very tempting. It’s all about bringing a bag of extra jackets, knitted sweaters, jeans and socks. Be prepared.

Once the outfit is chosen and the face is makeuped, you would head over to your neighbor’s/friend’s house. (Midsummer, unlike Christmas and Easter, is something you don’t celebrate with family). And the work starts. Everybody has hopefully brought flowers and birch branches. Somebody provides a cross shaped structure and everybody chips in to dress the cross in green leaves and flowers. The finish touch is a blue and yellow ribbon, but that’s really for the anal ones only. Next two big wreaths are prepared and fastened under the arms of the cross. That is the “midsommarstång”, the Midsummer pole, and this is where the action will take place later. From the left over flowers and leaves, girls and women bind their own wreaths to put on your head as a decorative party accessory. (Some buy theirs ready-made from a flower shop, but that’s cheating!)

First lunch, as a reward for the effort put into to the Midsummer pole. Usually we will barbecue something easy, hot-dogs, buns and ketchup tastes great when hiding from the rain. The parties usually take place semi-outdoors. We’re talking garage, tent, barn or similar, even though it is horribly cold. I think this has to do with the fact that many people gather, and the living room just isn’t big enough. Plus, it is a summer party, of course we have to enjoy the summer outside!

When everybody has been fed it is time to start the dancing. As I was growing up we usually were lucky enough to have my friend Andreas’ dad there, he can play any song on his accordion. We do silly dances around the Midsummer pole, accompanied by the tunes of the accordion. There is one song where you are a frog without a tail, another one tells of three little ladies on their way to the market. We also sing about how people dated in the olden golden day, about a carousel and its ticket prices and about grandma’s little crow. Yes, it’s a bit weird, but so much fun! 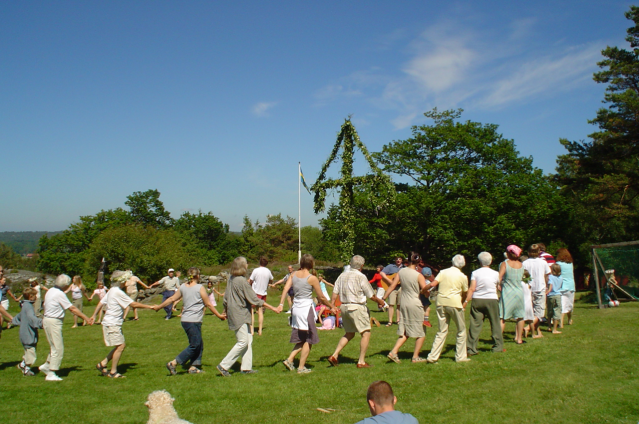 Yum. My mouth is watering as I write. Very sad to be missing this event this year.

Anyways. Another VERY important component of a proper Midsummer celebration is the shot, snaps. Different kinds with different degrees of tastiness are offered, everyone usually bring a bottle and then we all share. In Sweden we also like to sing a short song before you take the shot. (Not only shots, there are wine songs and liqeur songs and beer songs as well.) The lyrics to these songs are usually very old, not always understandable and often quite dirty.

After a couple of hours of eating and drinking and singing and shotting, it’s time for dessert. Strawberries is a given, some prefer it with cream, some with ice-cream. This is usually the first time in the year when we get to enjoy the expensive, but so delicious, Swedish strawberries. They taste like life, light and summer, all wrapped in a sweet little berry. Mmm. 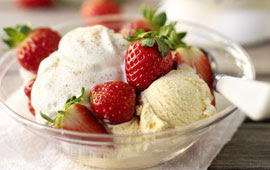 When I was little it was after dessert, when it starts to become a little bit darker, that my dad and some of the other dads, would come play with us. Crazy games of hiding, catching and then rescuing your friends as you stand in a bush with your heart beating with excitement and a tiny pinch of fear. Loved it. The older kids looking after the smaller ones as the dads return to the snaps. And then, the midnight tradition of, in silence, jumping over seven stone fences, picking seven kinds of flowers and then placing these under your pillow. It will make you dream of your future husband! (Depending on how much snaps you had, you might not dream anything at all.)

And then, back to the party. Back to the bright summer night, friends gathered around a table, covered in blankets and those knitted sweaters mentioned earlier are now on. Candles are lit. Someone might be playing the guitar if your lucky. On stereo songs that everybody hates, but which simply belong to Swedish summer. (Gyllene Tider and Tomas Ledin.)

It is quite, still, beautiful. A feeling of peace will spread in your body and you will sit there and talk to your friends until the sun gets brighter again. And Midsummer will be over. 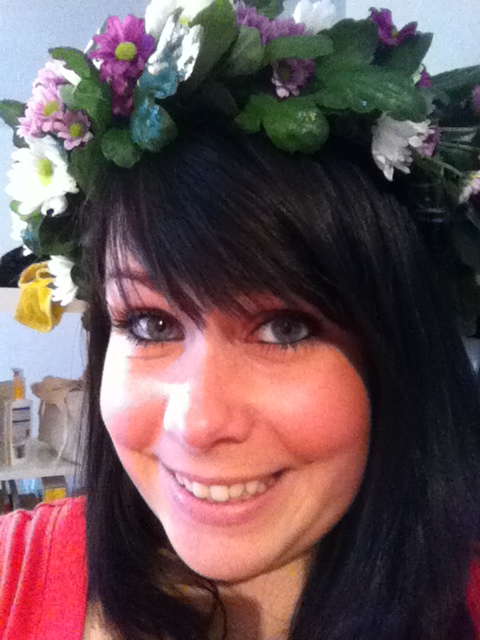 From last year’s improvised celebration in Frankfurt. Bought the flowers BUT made the wreath myself!